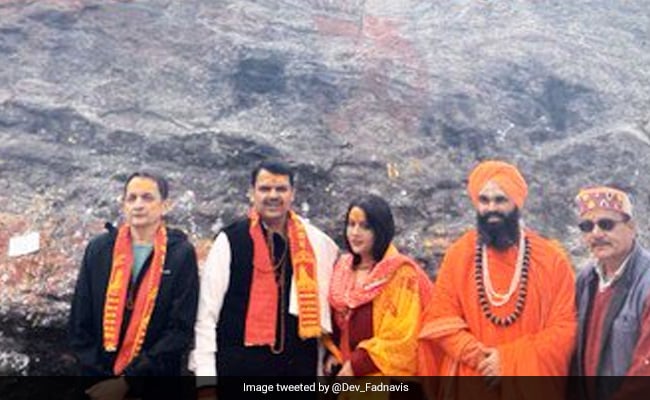 KEDARNATH: Maharashtra Chief Minister Devendra Fadnavis today offered his prayers to the shrine of Kedarnath in Uttarakhand, the day before the election results, in his state where he is seeking a second term.
Sharing photos from his Holy Trip, Devendra Fadnavis tweeted, “Take darshan and blessings at Kedarnath Temple this morning. Har Har Mahadev!”

Devendra Fadnavis ‘ visit to the Holy Temple was private and the district administration had no prior information, said Mangesh Ghildiyal, district magistrate of Rudraprayag, to the PTI news agency.

The Chief Minister of Maharashtra performed a pooja at the Himalayan shrine and spent about an hour talking to the “Teerth Purohits” (Priests) on the site, news agency PTI reported citing Badrinath-Kedarnath Temple Committee sources.

Assembly elections in Maharashtra took place on Monday with 60.5 per cent of the vote. The BJP-Shiv Sena Alliance, 211 out of 288 seats in the state, and the Congress-Nationalist Congress Party (NCP) had only 64 seats in the various exit polls.

Earlier in May, Prime Minister Narendra Modi visited the Himalayan shrine after a hectic campaign against the polls in Lok Sabha. Pictures showing PM Modi meditating in a cave on a bed have been widely circulated on social media.

“I had to spend some time alone and reflect on the work I did,” he told reporters after his visit to Kedarnath.

The Himalayan temple, dedicated to Lord Shiva, is situated 11,755 feet above sea level.

This year, the portals of the Kedarnath Temple in the Garhwal Himalayan range of the Rudraprayag district of Uttarakhand was opened to pilgrims on 9 May after a six-month winter break.